Everything’s naughtier after dark… Fall in love with the Wild & Bad boys. Long enough to burn up the sheets and short enough to leave you craving more.

If raw emotions, cursing, dirty-talk, or intense, passionate sex that sometimes includes a silk tie, turn you off, then the After Dark books are not for you. *NO CLIFFHANGERS* 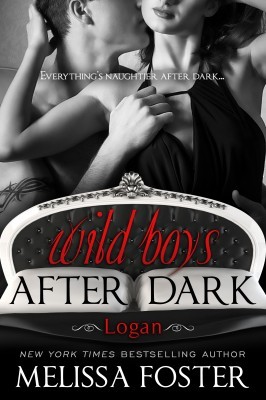 Stella “Stormy” Knight is an expert at hiding—her feelings, her past, and her identity. Sometimes all that hiding takes its toll, and she needs to come out from under that heavy suit of armor and cut loose—but it never takes her long to put it right back on and disappear without a trace

Private Investigator Logan Wild is relentless in his pursuit to discover the truth for his clients. He works hard, plays even harder, and always walks away unscathed and untethered. Until he meets mysterious and sexy-as-hell Stormy, who leaves him craving more than a one-night stand.

Passion ignites, secrets are shared, and their deep connection is impossible to ignore. But in order to have a future, Logan must uncover Stormy’s dark past—and when he does, he’ll hold her fate in his hands.

My Review of Wild Boys After Dark, Logan (Book #1)

Smokin’ hot and steamy, Wild Boys After Dark: Logan by Melissa Foster is a quick and saucy read. Unlike her other works (Love in Bloom, The Remingtons, Harborside Nights, etc.), The After Dark series is filled with dirty boys and lots of steamy sexiness. Okay, so there may be one or two dirty boys in the other series titles, but nothing like these dirty talking guys. Like Melissa’s other works there is still a story line that reels you in and keeps you hooked.

Logan is the first of The Wild Boys After Dark series and the series revolves around four brothers. Each book is about one of the four brothers, although all the brothers are included in each book. From what we learn in Logan’s story, they all have their own issues, but they still make time for family.

Logan, Logan, Logan. Where do I start? Oh yeah, Melissa Foster freaking did it again. Logan is a swoon-worthy ex-SEAL with a heart for family. She gives us characters that have heart, are full of fight, and are sexy-as-sin. Stella is a stellar heroine, she puts on a brave face, but still longs for her family. As the truth comes out, does she deserve the love that she’s given?

There is a bit of angst, but in true Melissa Foster fashion she gives us the ending the characters deserve and leaves us wanting just a bit more. No worries, though, because I’m sure there will be lots of steaminess in the next book. Heath’s book comes out November 17th.

At 169 pages, it isn’t a long book, but there is a lot of heat packed in those pages. A definite must read for your beach-day afternoon. What a great start to her new After Dark series and I cannot wait for more! 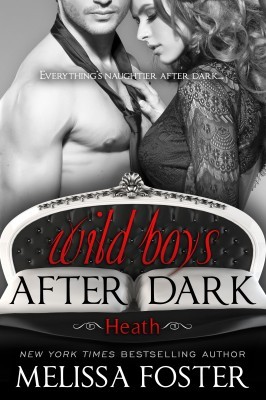 No last names. No strings. No ties.

Except of the silk variety.

Dr. Heath Wild and Allyson Jenner only wanted a simple tryst. But Heath couldn’t live with just one night, just one taste, of Ally—and Ally couldn’t escape the memory of his hands on her skin, the way he looked at her like she was his obsession, or his seduction, which had pushed her to the edge and had made her want to do things she never had before.

One night leads to one tantalizing phone call. Can one phone call lead to forever?

Available to buy from…

My Review of Wild Boys After Dark, Heath

Hot, steamy, and oh my! Heath and Ally meet at a medical conference and you know what happens. The one-night, no-strings-attached kind of night. But, as with all Melissa books there’s just a little something more, a spark. Can our couple deny their attraction and keep fate at bay?

Just as with Logan, Wild Boys After Dark, Heath is filled with more sex and naughtier dialogue than her other books (The Bradens, The Remingtons, etc.). You’ll love the heat in this one and you’ll find yourself falling for Heath in more ways than one. Sweet, sinful, and seductive, Heath is a good guy with a Wild streak and Ally is up for the challenge.

All the Wild brothers make an appearance in this book, and Logan is there with his love. I’m enjoying watching as each brother falls for their match. Definitely a must-read series from Melissa Foster. 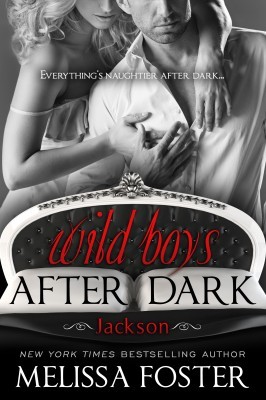 Receiving a marriage proposal is supposed to make a women happy, but when Erica Lane receives a beautiful marriage proposal from her perfect boyfriend on the eve of her annual camping trip with her best friend, Jackson Wild, the first thing she does is jump into bed with Jackson.

Jackson’s all too happy to screw the annoyance out of Erica. After all, they’ve always screwed the hell out of each other when they were bored or angry, lonely, or too damn drunk to see straight.

But the marriage proposal changes everything, and their annual camping trip takes unexpected turns. Will a few nights in the wilderness set these friends with benefits free, or lead them on a path of destruction?

My Review of Wild Boys After Dark, Jackson

Can someone slap Jackson upside the head? Just once. Knock some sense into him so that he can see what has been right in front of him for years! Years, I tell you.

Jackson, other than being a hard-headed Wild boy, is sincere, loving, and crazy. I truly am loving this new series from Melissa Foster. Naughtier sex scenes and rougher language, but still keeping with a love of family theme, makes for some steamy night reading. All the Wild boys make an appearance in Jackson and Laney’s story and I’ve got to say how much I loved the ending to this one.

The only issue I had with this one is that Laney was in a semi-serious relationship, but was still sleeping with Jackson (with her boyfriend’s knowledge). I’m not quite sure I could relate to that, but it added to the angst of the story and was plausible.

I know I’ve said it before (multiple times) but Melissa knows how to write a seriously sexy book boyfriend that you want to take home to Mama, after you’ve thoroughly enjoyed him. 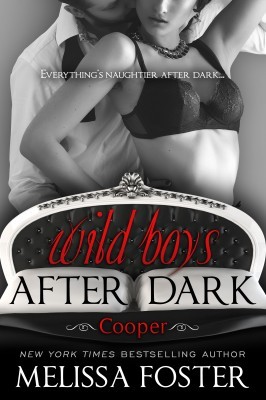 Four years ago at a film festival, Cici Fine met Cooper Wild, a man who turned her world upside down in the span of one deliciously perfect week. He was everything she’d ever dreamed of: sinfully sexy, intelligent, and incredibly loving. When the festival ended, they returned to their own hometowns with promises of forever. But Cooper disappeared, and Cici was left to raise the daughter he never knew about alone.

Cooper is finally thinking straight after years of being lost in grief from the tragedy that killed his father and left his mother blind. Now he’s on a mission to find the woman he left behind—the only woman he’s ever loved.

But Cici Fine is no longer a naive young girl. She’s a savvy businesswoman with big responsibilities, on the cusp of a life-changing move. When fate brings the two together, they’ll put the old adage to the test and find out if love really can conquer all.

My Review of Wild Boys After Dark, Cooper

Wow! Seriously, my favorite book of the series. Cooper and Cici have some crazy connection, even after years apart. Fate can be a bitch and Cooper knows all too well what role fate can play in life. Can one actually know their soulmate after a short-lived romance or does reality come into play?

Cooper and Cici are both hoping that reality is as sweet as the memories that they have of each other, but what about the truths that aren’t being said? Can they overcome all the obstacles in their way? I have to say I love the way that Melissa spun their story and how it unfolded. She kept the sexiness, steam, and romance that can be found in her other books of this series and gave us true love.

Cooper is my favorite Wild brother and I’m so glad we finally got his story. Sexy, smart, and sinful he can sweep a woman off her feet anytime. There’s just one woman he wants. Cici is the ultimate prize for him. That’s where is heart lies and where he wants to be.

Great conclusion to the Wild Boys After Dark Series and we get to see all the brothers find their perfect match. Loved this series.

Never miss a brand new release, special promotions or inside gossip again by simply signing up to receive your newsletter from Melissa.

Melissa has painted and donated several murals to The Hospital for Sick Children in Washington, DC. Her interests include her family, reading, writing, painting, friends, helping others see the positive side of life, and visiting Cape Cod.

Melissa is available to chat with book clubs and welcomes comments and emails from her readers. Visit Melissa at The World Literary Cafe or her personal website. Never miss a brand new release, special promotions or inside gossip again by simply signing up to receive your newsletter from Melissa.

Find Melissa on the following sites….

I received this book to review through Beck Valley Books Book Tours, all the opinions above are 100% my own. ALSO AVAILABLE IN THE LOVE IN BLOOM SERIES… 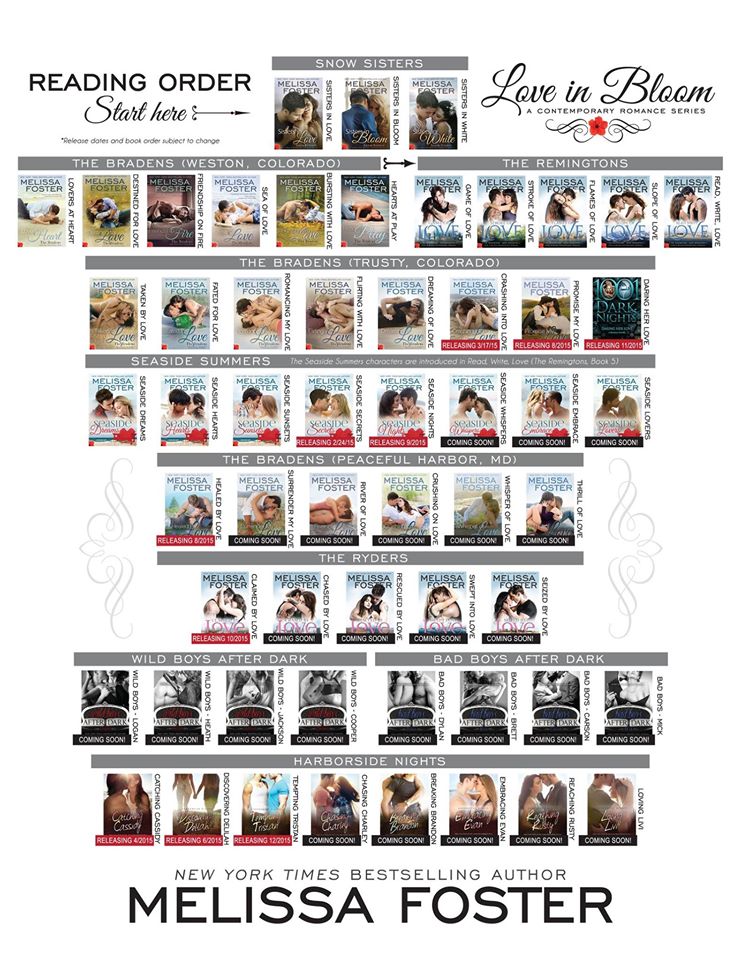 NOW FOR THE AUTHOR’S GIVEAWAY !! 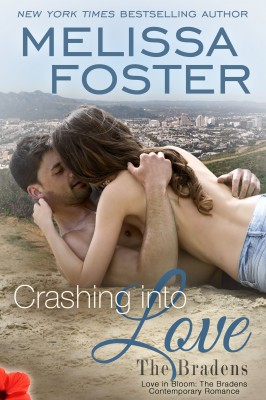